The University of Liverpool

The University of Liverpool

The University of Liverpool is a public university based in the city of Liverpool, England. Founded as a college in 1881, it gained its royal charter in 1903 with the ability to award degrees and is also known to be one of the six original “red brick” civic universities. It comprises three faculties organised into 35 departments and schools. It is a founding member of the Russell Group, the N8 Group for research collaboration and the University Management school is AACSB accredited.

Nine Nobel Prize winners are amongst its alumni and past faculty and the university offers more than 230 first degree courses across 103 subjects. It was the world’s first university to establish departments in Oceanography, civic design, architecture, and biochemistry at the Johnston Laboratories. In 2006 the university became the first in the UK to establish an independent university in China, Xi’an Jiaotong-Liverpool University, making it the world’s first Sino-British university. For 2016-17, Liverpool had a turnover of £521.8 million, including £94.5 million from research grants and contracts. It has the fifth largest endowment of any university in England.

Graduates of the University are styled with the post-nominal letters Lpool, to indicate the institution.

The University has a strategic partnership with Laureate International Universities, a for-profit college collective, for University of Liverpool online. The partnership provides the technical infrastructure to deliver courses worldwide.[11] 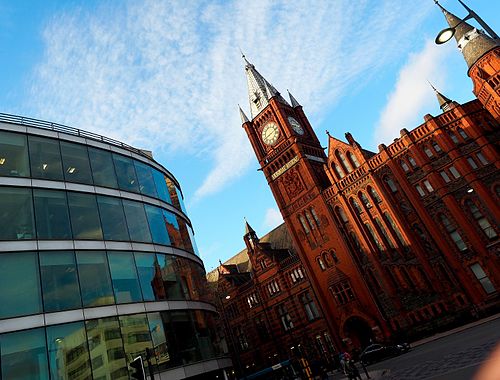 The centrepiece of the University estate, the Victoria Building

The University was established in 1881 as University College Liverpool, admitting its first students in 1882. In 1884, it became part of the federal Victoria University. In 1894 Oliver Lodge, a professor at the University, made the world’s first public radio transmission and two years later took the first surgical X-ray in the United Kingdom. The Liverpool University Press was founded in 1899, making it the third oldest university press in England. Students in this period were awarded external degrees by the University of London.

Following a Royal Charter and Act of Parliament in 1903, it became an independent university with the right to confer its own degrees called the University of Liverpool. The next few years saw major developments at the university, including Sir Charles Sherrington‘s discovery of the synapse and William Blair-Bell’s work on chemotherapy in the treatment of cancer. In the 1930s to 1940s Sir James Chadwick and Sir Joseph Rotblatmade major contributions to the development of the atomic bomb. From 1943 to 1966 Allan Downie, Professor of Bacteriology, was involved in the eradication of smallpox.

In 1994 the university was a founding member of the Russell Group, a collaboration of twenty leading research-intensive universities, as well as a founding member of the N8 Group in 2004. In the 21st century physicists, engineers and technicians from the University of Liverpool were involved in the construction of the Large Hadron Collider at CERN, working on two of the four detectors in the LHC.

Over the 2013/2014 academic year, members of staff took part in numerous strikes after staff were offered a pay rise of 1% which unions equated to a 13% pay cut since 2008. The strikes were supported by both the university’s Guild of Students and the National Union of Students. Some students at the university supported the strike, occupying buildings on campus. 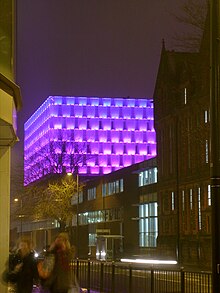 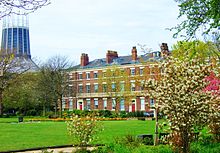 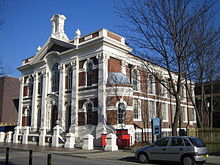 The Chatham Building. University of Liverpool, School of Management

The university is mainly based around a single urban campus approximately five minutes walk from Liverpool City Centre, at the top of Brownlow Hill and Mount Pleasant. Occupying 100 acres, it contains 192 non-residential buildings that house 69 lecture theatres, 114 teaching areas and state-of-the-art research facilities.

The main site is divided into three faculties: Health and Life Sciences; Humanities and Social Sciences; and Science and Engineering. The Veterinary Teaching Hospital (Leahurst) and Ness Botanical Gardens are based on the Wirral Peninsula. There was formerly a marine biology research station at Port Erin on the Isle of Man until it closed in 2006.

Fifty-one residential buildings, on or near the campus, provide 3,385 rooms for students, on a catered or self-catering basis. The centrepiece of the campus remains the University’s original red brick building, the Victoria Building. Opened in 1892, it has recently been restored as the Victoria Gallery and Museum, complete with cafe and activities for school visits Victoria Gallery and Museum, University of Liverpool.

In 2011 the university made a commitment to invest £660m into the ‘Student Experience’, £250m of which will reportedly be spent on Student Accommodation. Announced so far have been two large On-Campus halls of residences (the first of which, Vine Court, opened September 2012, new Veterinary Science facilities, and a £10m refurbishment of the Liverpool Guild of Students. New Central Teaching Laboratories for physics, earth sciences, chemistry and archaeology were opened in autumn 2012.

In 2013, the University of Liverpool opened a satellite campus in Finsbury Square in London, offering a range of professionally focussed masters programmes.

The Central Teaching Hub is a large multi-use building that houses a recently refurbished Lecture Theatre Block (LTB) and state of the art teaching facilities (Central Teaching Labs, CTL) for the Departments of Chemistry, Physics and Environmental Sciences, within the University’s Central City Centre Campus. It was completed and officially opened in September 2012 with an estimated project cost of £23m. The Main building, the ‘”Central Teaching Laboratory”‘ is built around a large atrium and houses seven separate laboratories that can accommodate 1,600 students at a time. A flexible teaching space, computing centre, multi-departmental teaching spaces and communal work spaces can also be found inside. The adjoining University Lecture Block building contains four Lecture rooms and further social spaces.

In 2008 the University of Liverpool was voted joint seventeenth greenest university in Britain by WWF supported company Green League. This represents an improvement after finishing 55th in the league table the previous year.

The position of the university is determined by point allocation in departments such as Transport, Waste management, sustainable procurement and Emissions among other categories; these are then transpired into various awards. Liverpool was awarded the highest achievement possible in Environmental policy, Environmental staff, Environmental audit, Fair trade status, Ethical investment policy and Waste recycled while also scoring points in Carbon emissions, Water recycle and Energy source.

Liverpool was the first among UK universities to develop their desktop computer power management solution, which has been widely adopted by other institutions. The university has subsequently piloted other advanced software approaches further increasing savings.The university has also been at the forefront of using the Condor HTC computing platform in a power saving environment. This software, which makes use of unused computer time for computationally intensive tasks usually results in computers being left turned on.The university has demonstrated an effective solution for this problem using a mixture of Wake-on-LAN and commercial power management software.

The university is a research-based university with 33,000 students pursuing over 450 programmes spanning 54 subject areas. It has a broad range of teaching and research in both arts and sciences, and the University of Liverpool School of Medicine established in 1835 is today one of the largest medical schools in the UK. It also has strong links to the neighbouring Royal Liverpool University Hospital.

In September 2008, Sir Howard Newby took up the post of Vice Chancellor of the University, following the retirement of Sir Drummond Bone.

The University has a Students’ union to represent students’ interests, known as the Liverpool Guild of Students.

Since 2009, teaching departments of the University have been divided into three faculties: Science and Engineering, Health and Life Sciences, and Humanities and Social Sciences. Each faculty is headed by an Executive Pro-Vice-Chancellor, who is responsible for all schools in the faculty.

The Research Excellence Framework for 2014 has confirmed the University of Liverpool’s reputation for internationally outstanding research. Chemistry, Computer Science, General Engineering, Archaeology, Agriculture, Veterinary & Food Science, Architecture, Clinical Medicine, and English, are ranked in the top 10 in the UK for research excellence rated as 4* (world-leading) or 3* (internationally excellent), and also performed particularly well in terms of the impact of their research. The Computer Science department was ranked 1st in UK for 4* and 3* research, with 97% of the research being rated as world-leading or internationally excellent – the highest proportion of any computer science department in the UK. The Chemistry department was also ranked 1st in the UK with 99% of its research rated as 4* world leading or 3* internationally excellent

In terms of average UCAS points of entrants, Liverpool ranked 40th in Britain in 2014. The university gives offers of admission to 83.1% of its applicants, the 7th highest amongst the Russell Group.

According to the 2017 Times and Sunday Times Good University Guide, approximately 12% of Liverpool’s undergraduates come from independent schools. In the 2016-17 academic year, the university had a domicile breakdown of 72:3:25 of UK:EU:non-EU students respectively with a female to male ratio of 55:45. 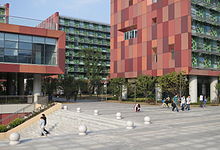 The campus is situated in Suzhou Industrial Park in the eastern part of Suzhou in the province of Jiangsu, 90 km west of Shanghai. It is a science and engineering university with a second focus in English, recognised by the Chinese Ministry of Education as a “not for profit” educational institution. The University offers undergraduate degree programmes in the fields of Science, Engineering, and Management. Students are rewarded with a University of Liverpool degree as well as a degree from XJTLU. The teaching language is English. 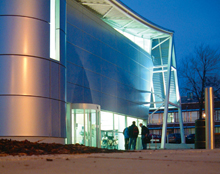 The University of Liverpool has a proud sporting tradition and has many premier teams in a variety of sports. The current sporting project comes under the title of Sport Liverpool and offers nearly 50 different sports ranging from football, rugby, cricket and hockey to others such as windsurfing, lacrosse and cheerleading.

Many of the sports have both male and female teams and most are involved in competition on a national scale. BUCS is the body which organises national university competitions involving 154 institutions in 47 sports. Most sports involve travelling to various locations across the country, mainly on Wednesday afternoons.

By continuing to use the site, you agree to the use of cookies. more information